After a great night in Nashville, we were headed to a music hub of another variety: New Orleans. I had never been to the Big Easy, but I was excited to check out the local culture and especially the jazz.

The scenery changed dramatically when we got out on the bayou. Billy Bob was still suffering, but I put him back in the cup holder for a quick picture. I think the mix of frigid air conditioning and glaring sun in that spot had taken their toll. 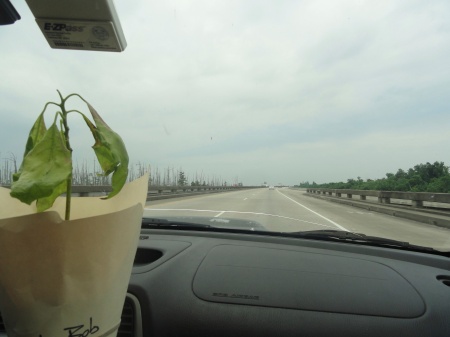 We stayed at the Hotel St. Marie in the French Quarter, something I found by chance on Priceline. The hotel was very quaint, with real keys to the rooms and everything.

The architecture in New Orleans is awesome. It’s worth the trip even just for that. There was still a fair bit of construction in parts of the city left over from Hurricane Katrina, but I was happy to see that a lot of the charm of the place had been preserved.

We walked down the river and spent some time watching the ferries and other boats go by. It had been a while since I had seen the great Mississippi, but it reminds me of Tom Sawyer every time.

We even saw a spontaneous parade while we were there, complete with a brass band and the Saints Cheerleaders. It must have been close to the start of the season.

Eventually we went looking for a place to eat. There were lots of people out on the streets in front of the restaurants enticing passersby to come inside. There was no question we were having seafood for dinner, so we ended up at Pier 424. Crab dip dinner, for the win. 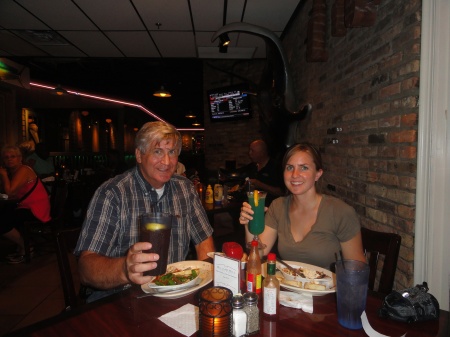 Dad kept ordering drinks for me and I’m pretty sure he even instigated this photo.

After dinner we made the obligatory trip over the Bourbon Street. New Orleans is just as pretty as night.

Although this Jesus shadow thing might have been a bit much.

We landed at Maison Bourbon and settled in for some great music.
Why aren’t there more jazz clubs in the world?

After the music, we walked back to our hotel for the night. The next morning we had one more landmark to visit before we left for Texas: Cafe du Monde.

I’m sure everyone is aware, but this particular Cafe is home to the famous New Orleans beignets, donut-like pastries smothered in powdered sugar.

This is the best way to start your day. Really.

Near the cafe are some gardens and street art which we stopped to look at.

There were lots of fountains around. Water is definitely central to being in New Orleans. 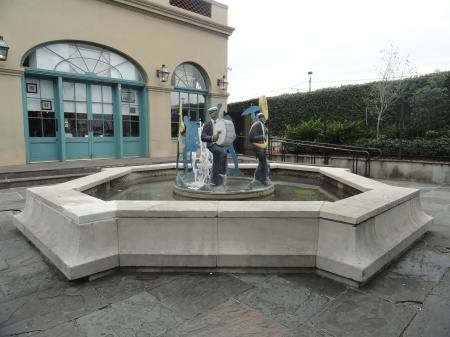 Water and churches. Their football team is called the Saints, for crying out loud.

New Orleans was awesome. Definitely a bucket-list kind of stop. I bought a jazz CD while we were there, but it’s just not the same as listening to the music live. I should really visit more often while I’m still as close as I am.

As awesome as New Orleans was, we had to get moving to Texas.